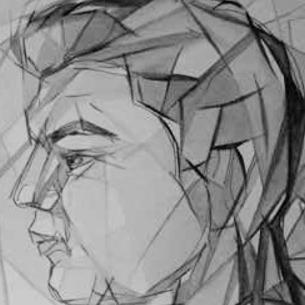 Tawfiq Abdel Al was born in Acre in 1938. He lived in an old three-floor home in the al Majadleh neighborhood. The house had an ornamented ceiling and ivory stairs overlooking the sea. Tawfiq’s talent and interest in arts became apparent at an early age. His first art exhibition was held at his public school under the supervision of his teacher, George Fakhouri. He was only ten years old! Following the Nakba in 1948, he was forced to leave Palestine with his family. They moved to Lebanon, where he went on to graduate from high school. Tawfiq Abdel Al never completed his academic art studies, yet that did not stop him from developing and honing his talent.

At the time, the cultural and arts scene in Beirut –the Lebanese capital- was at its prime, compared to other Arab capitals. In the 1960s and 70s, Beirut was a hub for Arab artists and intellectuals from over the world. This rich atmosphere had a positive impact on polishing Abdel Al’s talent and allowed him to share his works with his Lebanese counterparts. Moreover, Tawfiq participated in several regional exhibitions with other artists in Beirut, Baghdad, Damascus, Tripoli-of-the-west, in addition to in other countries including Turkey, France, Switzerland, Yugoslavia, and Portugal. Abdel Al also participated in exhibitions organized by the General Union of Palestinian Plastic Artists, of which he was a founder. The artist also made important tactical contributions to the Palestinian national movement. Abdel Al designed several posters and illustrations in newspapers and magazines published by the Democratic Front for the Liberation of Palestine, of which he was an active member.

·      Member in the Lebanese Artists Association for Painting and Sculpture, 1960

·      Founding member and Deputy Secretary of the General Union of Palestinian Plastic Artists, 1970

·      Volunteer in humanitarian work for the Palestinian Red Crescent, 1971

·      Founding member and responsible for the People’s Hall for Plastic Arts, 1977

·      Member of the General Secretariat and Executive Office of the Palestinian General Union of Plastic Artists, 1979

·      Member in the Palestinian Writers and Journalists Union, 1980

·      Member in the International Association of Plastic Arts, 1980

·      A number of Abdel Al’s works are distributed among global and Arab museums around the world, including world leaders and embassies.

·      A large number of Abdel Al’s resistance art posters and murals have been published.

His last exhibition came after a ten-year absence. Abdel Al had not organized an exhibition since 1982 when all his works were destroyed in a fire during the Israeli invasion of Beirut. He resurfaced in February 1992 with an amazing collection, that was part of an exhibition in the Glass Hall of the Lebanese Ministry of Media.

Tawfiq Abdel Al has been honored with several medals, including the Lotus Medallion in Moscow, and an honors degree from Sursock Museum (1970). He also received Naji al Ali’s armor in Damascus (1991). Lastly, Abdel Al was awarded the Jerusalem Medal in a celebration organized by the Union of Fine Arts in Syria on February 19, 1993