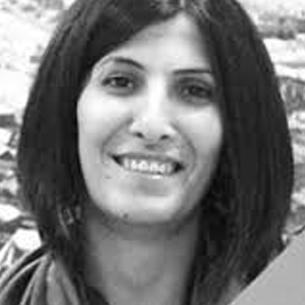 Sandi Hilal graduated in Architecture. She works as a consultant with the UNRWA on the Camp improvement program. She is a visiting professor at the International Academy of Art Palestine. She is co-curator of the project Decolonizing Architecture. In 2006 she obtained the title of research doctorate in Transborder policies for daily life in the University of Trieste. From 2001 to 2005 she has been teaching assistant in Visual Arts and Urban Studies at the IUAV University of Venice. She’s a co-curator of different research projects shown internationally: Stateless Nation and Arab City Project (with Alessandro Petti), Border devices (with multiplicity). Her publications include Senza Stato una Nazione, (Marsilio, Venezia 2003); Living Among the Dead (Domus 880, April 2005); Road Map (Equilibri, August 2004), la stanza dei sogni (Liguori Editore, 2004), Stateless Nation (Archis, Preview#4 2003). Her projects have been published in national and international newspapers and magazines: the New York Times, Il Manifesto, Al Ayyam, Al- Quds, Art Forum, and Archis.