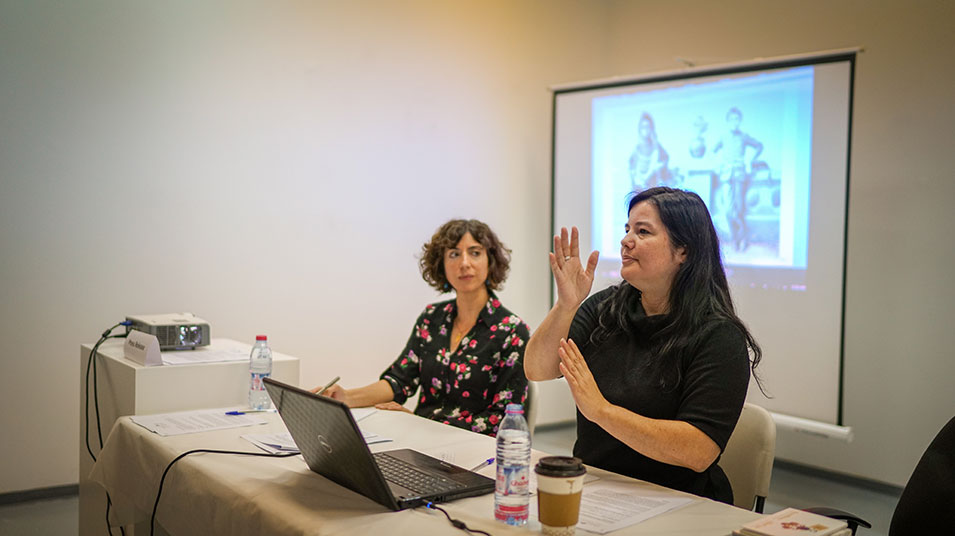 Wanda Nanibush, a Canadian-based art curator and community activist of Indigenous peoples, presented a lecture titled “Performing Sovereignty” at the Birzeit University  Museum on May 2, 2019, an event co-organized by the Faculty of Arts’ cultural committee and the Institut Français du Proche-Orient in Jerusalem.

Nanibush’s lecture attracted academics and researchers interested in analyzing forms of colonial representation, students of design and contemporary art, and performing artists, as she discussed art’s potential to resist attempts to erase the culture of Indigenous peoples and a history of subverting colonial representations and power dynamics.

The Birzeit University Museum director Dr. Nazmi Jubeh opened the event by presenting the Museum’s upcoming activities, asserting that the museum is keen to provide a permanent showroom to showcase the university’s extensive collection of Palestinian heritage and artifacts. He noted that the mmuseum also exhibits students’ designs and projects to encourage and promote creativity and innovation at the university and in the wider Palestinian community.

Dr. Rania Jawad, an assistant professor in the Department of English Language and Literature and the moderator of the lecture, presented Nanibush as a curator of Indigenous art and co-head of the Indigenous & Canadian Art department at the Art Gallery of Ontario. Nanibush holds a master’s degree in visual studies from the University of Toronto and has taught graduate courses on Indigenous history and politics at the University of Toronto and at OCAD University. She is currently writing a book titled Violence No More: The Rise of Indigenous Women and finishing a film on Indigenous resistance.

Nanibush began her lecture by introducing herself as from the Anishinaabe first nations, from the Wolf Clan, and Nanibush referring to a trickster figure. She offered a reading of Canada’s past in its attempts to suppress Indigenous identities and conceal the unhealed history of the colonization of Indigenous peoples, which she asserted had failed. Nanibush opened with a famous photographic image from the late 1800s showing Thomas Moore, an Indigenous boy, before and after he was forced to attend a governmental boarding school, known as residential schools. These were made compulsory for indigenous children with the goal of cultural genocide by processes of forced assimilation into the white culture of the colonizers. What is not often mentioned, Nanibush noted, is that Moore contracted tuberculosis while at the school and died four years later. His fate is one example of the hundreds of years of  colonial oppression and colonial representation of the indigenous.

Nanibush also discussed the conundrum faced by the indigenous in the mid 1800s, who striving to maintain their traditional cultural practices that were banned by the colonizers, were only allowed to perform them onstage for the colonizers. While these performances served to fulfill the desires of the colonial imaginary, the indigenous actors, Nanibush noted, were acting and not performing real ceremonies. Through this and other examples from the past and present, Nanibush illustrated the cultural genocide of Indigenous peoples that has been practiced ongoing by subsequent governments and has left an intergenerational impact till this day.

As a committed activist, involved as an organizer in the Idle No More movement that asserts Indigenous rights, Nanibush explained how Indigenous peoples have been able to resist attempts to bury their culture and identity by performing and practicing their art to subvert colonial representations and reclaiming public spaces to reaffirm  and preserve their culture and heritage.

Nanibush explained how cultural and political resistance constitute tools for remembrance and commemoration by offering glimpses of a history subjected to violent erasure and how creative fiction is a force against the narratives of colonial capture, loss, and disappearance.

The lecture was followed by a Q&A session moderated by Dr. Jawad.