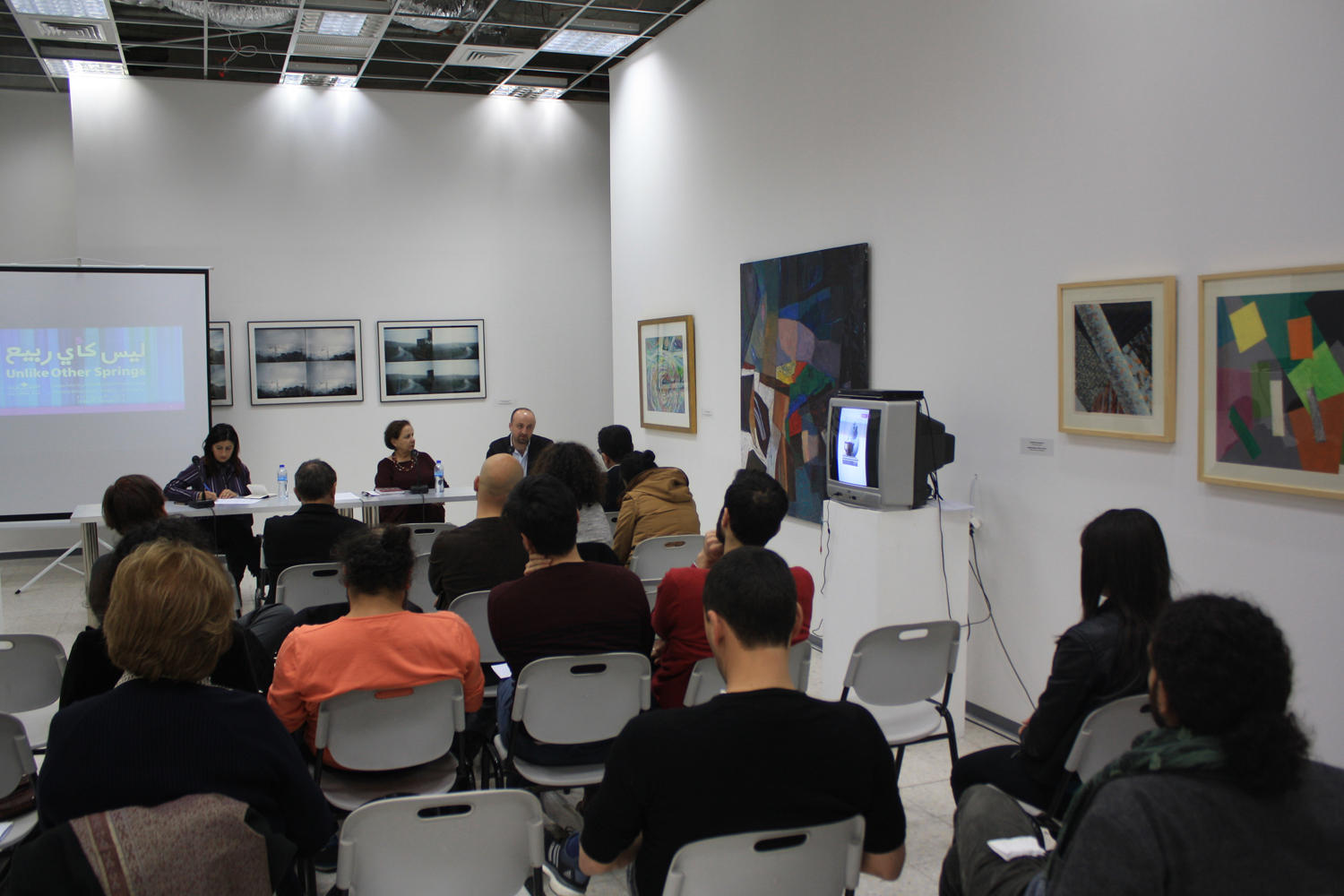 In the framework of the exhibition Unlike Any Spring, the Birzeit University Museum organized on Saturday, March 26, the seminar “Acquiring Art in Palestine”. The event revolved around the current and future trends of art acquiring in the Arab region and Palestine. Ms. Inass Yassin, the Museum Director, opened the seminar, welcoming the audience and introducing the speakers.
Artist Vera Tamari was the first speaker to take the floor. Tamari is the curator of Unlike Any Spring and the founder of the Birzeit University Museum in 2005. In her presentation, Tamari spoke of art collecting in Palestine and paid special attention to the University’s experience in the field. She highlighted the early days of Birzeit’s art collection and the major role it played in pushing forward the general cultural experience in the University.
The second talk was given by Mr. George Al-Ama, a researcher on tangible cultural heritage, collector of art and artisanal works and activist in local and regional art markets. Al-Ama presented his experience of assembling a rich and diverse collection, which he built following his personal areas of interest, scientific research and the standards of the art market.
Artist Khalil Rabah was the third speaker of the day. Rabah is known for art projects that question all components of the art industry, push for new readings of art practice and develop new forms of discussion around art. In his talk, Rabah presented one of his projects, the “Palestinian Museum of Natural and Human History”. Some of his other projects, which reconstruct meaning through the imaginative, include initiatives such as An Art Exhibition and The Palestinian Airlines.
An intervention by Mr. Jack Persekian on the Center for Art on Migration Politics (CAMP) followed. The concept of CAMP was developed in Al-Ma’mal Foundation in Jerusalem within its art residency program (since 1994) and its joint projects with Anadil Gallery in Jerusalem, which revolved around the theme of the diaspora. Persekian is the Co-Director of Al-Ma’mal Foundation. In 2012-2015, he was the director of the Palestinian Museum. He was also a founding director of the Sharjah Art Institute and the curator of the Sharjah Biennial from 2004-2011.
The final talk was given by Ms. Lara Khaladi, former director of the Khalil Sakakini Center (2012-2013) and co-curator of many exhibitions, including the Riwaq Biennale 2013, the Jerusalem Show and /Si:n/ Festival 2013-2014. The talk, titled A Note on Empty Museums and Wasted Collections, presented various experiences of buying artworks as a form of art practice.
The event raised questions around art acquiring trends and their connection to the history of local cultural practice and the growth of the art market. It was concluded with an open discussion and a Q&A session with an audience of artists, art students, amateurs and culture professionals.