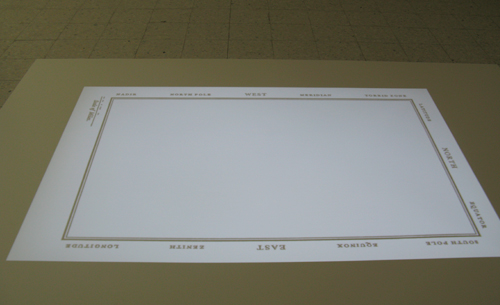 “White Map” takes as a point of reference an illustration that accompanies the poem of Lewis Carroll‘s poem "The Hunting of the Snark" (1874).

"White Map" is a completely blank map apart from few celestial coordinates that form symmetry of an imagined journey. The symmetry becomes an empty space that invalidates conventions and allows for a view of the world without definite purpose; a metaphor for all maps by containing the sum of all possible projections.

"White Map" is a metaphor for all maps as it presents infinite possibilities for every potential.

"White Map" is a map of the Utopian city. It functions as a vision that “trespasses imagination" for a world that swallows its white void, boarders, divisions, and obstacles.

Despite this ancient vision of the world (published in 1874), it still “trespasses the imagination" of contemporary consciousness. In spite of its continued influence on it as an outlet for our existence loaded with restrictions, barriers, obstacles and boundaries.

Through this artwork I try to question the possibilities we have, in a world where divisions, separations and borders are expanding non-stop, in a world where the borders between the real and the virtual are unrecognizable anymore. The Poem "The Hunting of the Snark, an Agony in Eight Fits" (1874) is a poem about a crew who is looking for a creature- The Snark, a creature as Carroll describes is “unimagined,” and for their quest they were given by the Bellman a white map.

Hunting of the Snark, An agony in Eight Fits

The Bellman himself they all praised to the skies-

Such a carriage, such ease and such grace!

Such solemnity too! One could see he was wise,

The moment one look in his face!

He had brought a large map representing the sea,

Without the least vestige of land:

A map they could all understand.

"What's the good of Mercator's North Poles and Equators,

So the Bellman would cry: and the crew would reply,

"They are merely conventional signs!

"Other maps are such shapes, with their islands and capes!

But we've got our brave Captain to thank"

(So the crew would protest) "that he's brought us the best-

A perfect and absolute blank!"