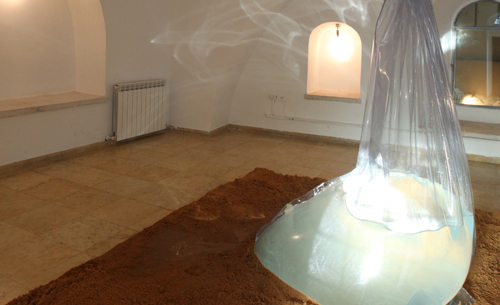 Since we live in the West Bank, we are deprived from the sea by the force of the military occupation… I miss the sea and I long to lie on the sand of its beach, to fish, to walk around the harbor and to listen to the sea gulls. I have the right to hear the sound of waves. The sea is not far; in fact, when the sky is clear you can see it from Ein Misbah in Ramallah. I thought of reaching the sea in my own way. I thought of making a temporary sea. I asked my friends to bring sea water from wherever they are and to send it to Palestine. I collected the water they sent in a big bag, which I called “Sea Package”… A sea that carries no waves, no port, no beach… A sea that does show to the others any of its specificities as it is only a package that perhaps might carry me to the real sea... one day.