Cast out of your Tomb 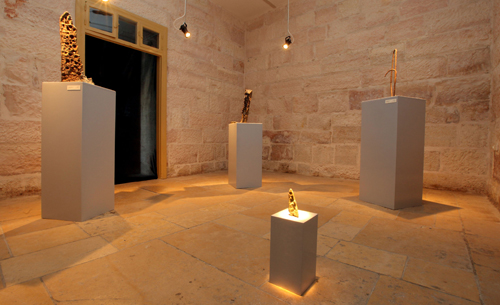 Cast out of your Tomb

“Blessed shall you be when you arrive and blessed shall you be when you depart” is an ancient rabbinic academy’s inscription on a hill overlooking the sea in the Ajami neighborhood of Jaffa where lies the Al Kazakhani graveyard. Dating back to the 19th century Ottoman Empire, the name Kazakhani takes its origin from the previous usage of the site as a location for the sales of gas (Kaz).

With the exception of a few recent graves belonging to families in the neighborhood, the graves belong mostly to ancestors of refugees whose families were exiled in 1948. Due to corrosion from the sea, and negligent maintenance by local authorities, the names and forms of the tombstones are no longer recognizable, thus reducing the symbols of death and honor to a constant state of deterioration.

The one grave which is in exceptionally in a good state is that of Ibrahim Abu Lughud who was an intellectual, political activist and Palestinian leader born in Jaffa under the British Mandate. He left Jaffa on the last evacuation boat in 1948. After a successful academic career in the US, he returned to the West Bank where he became vice president of Birzeit University. Before his death in Ramallah in 2001, he had requested to be buried in Jaffa. Despite attempts by the Israeli authorities to prevent it, he was buried in the Kazakhani cemetery, hence becoming one of the few Palestinians who have fulfilled the ‘Right of Return’ if only, paradoxically, in death.