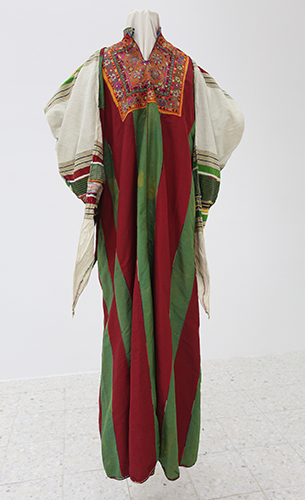 Dresses made with fabrics woven with the inclusion of green and red or pink silk bands along the edge close to the selvedge, or entirely comprised of strips of alternating green and red silk were generally referred to as heaven and hell dresses (thob janneh-u-nar).  Green referred to heaven (janneh) and red or pink to hell (nar), literally meaning fire. Green being the principal colour of Islam and that of the silk worn by the inhabitants of Heaven as stated in the Holy Qur’an (in Surat Al Insan verse 21) explains the association of the colour to Heaven. Red on the other hand, being the colour of fire and blood, metaphorically associated with passion, sex and the flesh and therefore an insinuation to mistakes and sin could have been seen as the ideal counterpart to green. Pink as a colour sometimes replacing red, could have been a variation on red in terms of style and silk thread dyes.
The idea of having both the red and green in a dress as references to heaven and hell could also be considered a statement of piety by the wearer or maker. The presence of both colours in equal and balanced quantities could be taken as a metaphor to the equal possibilities of salvation and damnation, whereby the wearer expresses their submission to the Devine by never assuming their fate and constantly reminding themselves of the fact.
All four dresses exhibited in this section could be identified as a janneh-u-nar dress despite their varying origins and styles.